Some airlines make small tweaks to their seats at the front of the cabin. Others overhaul but don't reinvent business class and first class. And then there's Japan's All Nippon Airways.

With little fanfare, ANA unveiled brand new first and business class cabins last month for some of its Boeing 777s – including a game-changing new business class seat that's light years ahead of its older version. Within weeks, it started flying between Tokyo-Haneda (HND) and London-Heathrow (LHR).

And as expected, these new seats will make their way to the U.S. ANA announced this week that it will start flying one of these overhauled planes between New York City (JFK) and both Tokyo-Haneda (HND) and Tokyo-Narita (NRT) sometime in winter 2019. The exact date was not announced.

Let's take a look at ANA's new business class first, as it's by far the biggest upgrade.

ANA calls it The Room, and these seats are both massive and beautifully designed. They measure in at 35 inches wide, making them some the largest business class suites in the skies. And they're each equipped with fully closing doors.

Curious how to book these seats? Read our full guide to using ANA Mileage Club!

These seats are arranged in a 1-2-1 fashion, with some seats facing forwards and others facing backward – much like Qatar Airways' revolutionary Qsuites. In fact, the bones of these seats are more or less identical to Qsuites.

But these new seats … ahem, Rooms … are just drop-dead gorgeous. ANA hired a prestigious design firm to do the work, blending both Eastern and Western elements. They incorporated three different wood finishes – Rosewood, Light Japanese Ash and Dark Japanese Ash – to infuse the seats with a “home away from home” feeling.

For comparison, here's what business class currently looks like on all of ANA's flights between the U.S. and Japan. 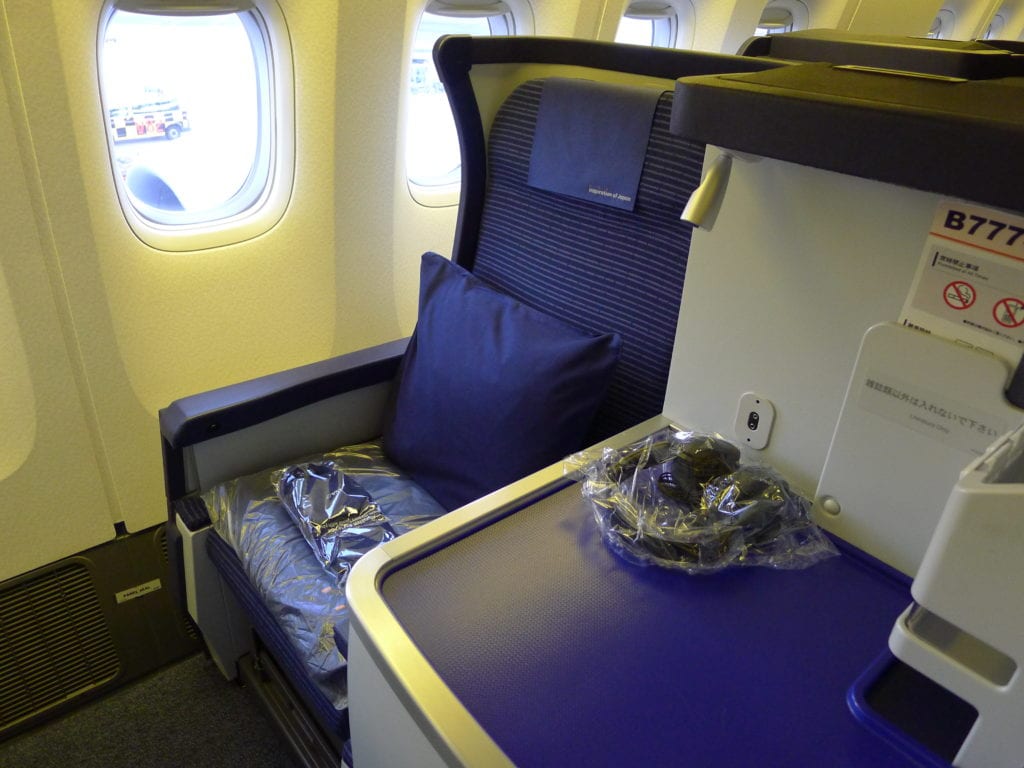 So yeah, this is a big step up. Our friends at God Save the Points called it the best business class in the world – better than even Qsuites. If that's not high praise, we don't know what is.

As for ANA's new first class cabin, the changes are more incremental – but certainly a big step up.

ANA calls it The Suite, and these are somehow even bigger: They clock in at 38 inches wide and 76 inches long – the perfect spot to sleep in the sky. Every suite is equipped with a 43 inch – yes, 43 inch – 4K TV. Just as with ANA's older first class cabins, there are only eight first class seats.

Importantly, this new design gives solo flyers better access to the windows and traveling partners a better chance to get close. That's one of the biggest drawbacks of ANA's otherwise outstanding first class, which we loved flying from Chicago-O'Hare (ORD) to Tokyo-Haneda (HND) earlier this year.

We don't know exactly when these new seats will be flying in and out of New York, so hang tight. It could be October or November, or it could be nearly into the spring of 2020.

If you're looking to fly this outstanding new business class, ANA's own MileageClub program is far and away the cheapest way to do so. If you time it right, you can fly business class for just 75,000 miles round trip. That's what most airlines charge for a one-way in business class – or a round-trip in economy.

If you're looking to get to the 2020 Summer Olympics in Tokyo, you'll wind up paying more: Rates will start at 90,000 miles round-trip during that high summer season, if you can find the award availability. And either way, you'll be hit with about $250-300 in fees. But that's a small price to pay for this luxurious experience.

You don't need to fly ANA to earn these miles. You can transfer them from American Express cards like the American Express Platinum. That means if you're eligible for the 100,000-point bonus via CardMatch, you'll have enough to fly business class to Tokyo and back – with plenty left over.

Read our guide to booking ANA business class with miles.

If you're ready to splurge for the top-notch dining and top-dollar champagne (with caviar, duh) of first class, skip ANA MileageClub and use Virgin Atlantic miles instead. By using this partner airline to book ANA First Class, you can do it for as low as 110,000 miles round trip.

That's what United charges for a one-way trip in first class. And these flights typically cost $20,000 or more. Safe to say this is one of the best deals in points and miles.

How could you not want to fly this gorgeous new plane?

Editorial Note: Any opinions, analyses, reviews, or recommendations expressed in this article are those of the author’s alone, and have not been reviewed, approved, or otherwise endorsed by any card issuer.